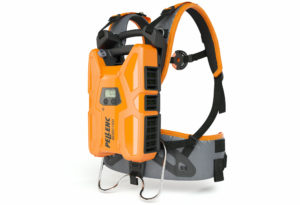 Pellenc has announced the launch of a new battery – the ULB1500, which gives users 50% more stored energy when compared to the existing largest battery on the market, allowing for a full day’s work without having to recharge.

The ULB1500 battery can be used on the complete range of Pellenc tools. From hedgecutters, hand-held blowers to brushcutters and pedestrian mowers, the ULB1500 will complete over 1200 recharging cycles – which effectively equates to five years use or 7000 litres of petrol.

It has a full display on the front of the battery which allows the operator to see power consumed, cost of fuel saved in terms of petrol, the tools that have been used and a battery life indicator.

Designed to go into ‘sleep’ mode after 24 days of inactivity as opposed to three days on earlier models, it is also IP54 water-proof rated, meaning that the worry some users have of working in the rain with a battery-powered product is no longer an issue.

It also has a completely new harness designed around operator comfort which allows the battery to be stood upright when taken off of the operator. Another new feature is that it can be fitted in either direction on to the operator allowing the cable to come out of the top or bottom depending on the type of machine being used.

All Pellenc batteries and tools come complete with a three year commercial warranty as standard – the first manufacturer to offer this on battery-powered tools. Pellenc is exclusively distributed in the UK and Ireland by Etesia UK.