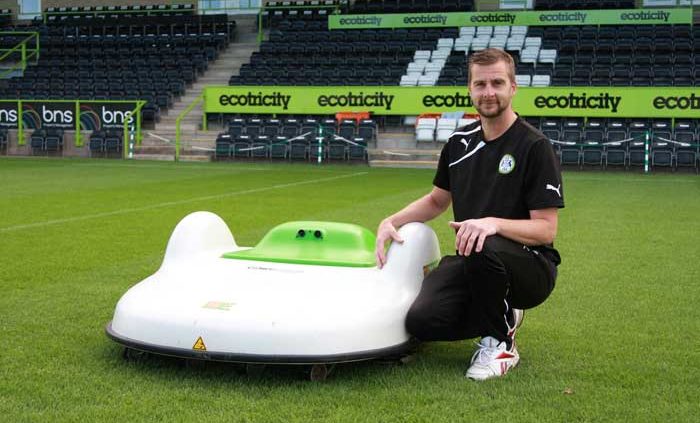 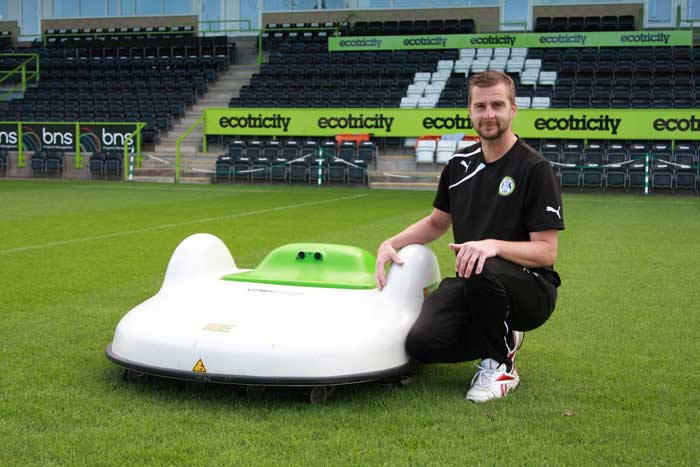 The new head groundsman at Forest Green Rovers FC, Matt Rainey, has praised Etesia’s ETMower claiming that it is like having an extra member of staff.

Forest Green Rovers FC, based in Stroud, Gloucestershire, is striving to become the most sustainable football club in the world and has already taken measurable steps to ensure this happens: The club is the proud owner of the world’s first organic football pitch, solar power is installed on the stadium roof, every drop of water is recycled via a water harvesting system and the team kit is even washed in phosphate-free washing powder.

As you can imagine – keeping Co2 emissions at an absolute minimum is extremely important to a club like Forest Green Rovers, and this is where Etesia’s ETMower comes in.

The state-of-the-art robotic mower, which is also used by Bayern Munich FC in Germany, considerably reduces the cost of pitch maintenance, not only in terms of labour and maintenance costs, but also by cutting energy bills. Co2 emissions are also much lower than conventional powered petrol/diesel mowers and Matt believes that the machine, who he affectionately calls ‘Mow’, perfectly fits within the club’s philosophy.

“Mow costs us absolutely nothing to use because it simply charges from the solar panels on the roof of the stadium. Energy consumption is kept to a minimum and there’s no fuel or noise to deal with which is a lot better for the environment.

“It also mulches the grass so it means that Mow is putting all the goodness of the grass back into the soil. It ticks every box that we adhere to at the club.”

Matt, who originally started his career at the club, re-joined Forest Green Rovers in July this year and that was when he was first introduced to the ETMower. His relationship with ‘Mow’ got off to the best possible start when he realised that the powerful robotic mower would play a key role in his pre-season preparations.

“Because of ‘Mow’s’ weight, you can cut much earlier in the season compared with any other piece of machinery – potentially up to fourteen days earlier.
“After the pitch has been seeded, you’d normally have to wait until the grass is 40-45mm before physically going onto the pitch with rotary mowers but with ‘Mow’ you can put him on at 20mm. It’s great because it speeds things up, establishes the roots, and it can work in conditions that you can’t. I can’t work in torrential rain for example but ‘Mow’ can.”

As Matt says, the ETMower can work constantly for 24 hours a day, 7 days a week and 365 days a year in most weather conditions. Once the area to be covered has been marked out by a low voltage peripheral cable buried in the ground, the ETmower gets to work automatically, according to your programming. No human intervention is required, meaning that groundsmen like Matt have more time to focus on other important tasks.

“Mow is a great tool to have in the shed because it can do things that groundsmen can’t. He also significantly frees up my time. At Forest Green Rovers, we focus on our soil biology so our aeration programme is a lot more intense than others are. Feeding regimes are organic so we are always applying something and then there is the stadium maintenance as well. We’ve also got an outside remit which involves attending to the growth of wildflowers. For a club at our level the ETMower is my extra man – ‘Mow’ is my assistant and he never complains either!”

While ‘Mow’ may not complain, the ETMower does however send you and SMS text message to let you know of any incident it may encounter indicating exactly what the problem is. Also, if it needs to recharge its batteries, it automatically goes to its charging station and resumes mowing once it is fully charged.

Win an Etesia pedestrian Mower at SALTEX
Scroll to top