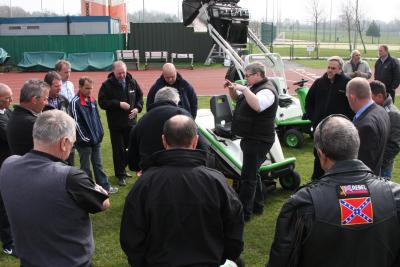 The Etesia UK ‘Green Technology’ roadshow has reached its first pit-stop, bringing the turf maintenance machinery manufacturer’s spring tour of the country to a successful conclusion.

The recent roadshows held at Merrist Wood College, Guildford and Edge Hill University, Lancashire in late March sandwiched an invitation to speak about environmentally-friendly grounds maintenance equipment at the Plant Network Conference held at the University of York.

Organised in conjunction with their UK dealers, the events were a hands-on, arrive and drive event for all existing and prospective Etesia and Pellenc customers to find out more about the new range of environmentally friendly grounds maintenance equipment and gain valuable advice from the Etesia and Pellenc expert’s on-hand.

“The first series of roadshows was a great success,” says Etesia UK’s General Manager, Les Malin. “We were pleased to show off our latest launches which were the ETMower range of robotic mowers and the electric Bahia M2E, which were both well received by everyone in attendance. There also seemed to be a real buzz around our range of Pellenc battery-powered equipment and we’ve since received several orders”.

The attendees commented that the days had been very informative and that they would be taking many of the ideas back to their respective organisations.

There will be further opportunities to take part in a roadshow near you later this year, with details to be released soon.