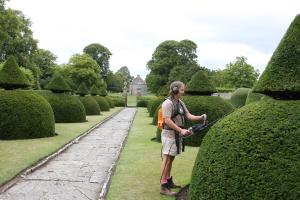 National Trust properties in south Somerset have trimmed energy costs, time and noise as well as hedges this year. The four properties in this area of Trust administration switched to battery power in 2011 for the significant hedge cutting and topiary work that has to be undertaken annually and the results are significant. It is the Trust’s Greener Garden Fund for more ecologically sound outdoor upkeep of its properties that aided the purchase of Pellenc Helion lithium-ion battery-powered trimmers supplied by machinery specialists Bigwood and Partners of Taunton.

Lytes Cary Manor at Charlton Mackrell near Somerton dates back to the 14th century and was the home of medieval herbalist Henry Lyte, notable for his plant directory Lytes Herbal. Restored from dereliction 100 years ago by Sir Walter Jenner, its much-visited garden is a combination of outdoor ‘rooms’, topiary features, statues and herbaceous borders.

Damien Mitchell, the gardener-in-charge there, has two and half miles of hedging all told, predominantly of yew, hornbeam, beech, lime and privet. Work to keep them trim begins in mid-May and finishes in late October, which is peak visiting time and before now, when petrol or electric trimmers were used, this presented Damien with a variety of health and safety issues as well as user and visitor discomfort. Noise levels and trailing wires were the main offenders.

This year for the first time he used a Pellenc Helion hedge cutter with back-pack battery unit which drastically cut noise, user fatigue, and detrimental effect on passing visitors. These plusses alone would tick boxes in the Trust’s Greener Garden checklist, but a further bonus at Lytes Cary Manor is that power for the batteries comes from an on-site solar panel.  Three to four hours of free charging is enough for a day’s operation, so Damien’s cutting work is about as energy efficient as you can get and with zero carbon emission.

Topiary on yew close to the Manor itself and the shaping of 12 Apostles, a feature common to many large estate gardens of the time, also in yew, is a skillful trimming task that has to be conducted twice yearly. These are 100-year old features that demand serious attention and work on them this year has been noticeably more efficient, safer and quieter, reports Damien, who has up to four permanent gardening staff working at the property and about 50 volunteers.

“The new Pellenc trimmer is a lot more user friendly and the environmental advantages are considerable,” he says. “We are a lot more comfortable doing the work when visitors are here because they are not inconvenienced at all.”

Damien’s counterpart at nearby Tintinhull Garden, Tanis Roberts, has just volunteer support for her work at this 17th century manor house. Created last century, the gardens there have over 25,000 visitors each year and feature secluded lawns, pools and colourful borders, plus an attractive kitchen garden, woodland walk and orchard. Focal point is the Eagle Court and adjacent Middle Garden, characterised by striking boxwood domes along a central path.

Every year Tanis has the job of cutting the sixteen 100 year old plus Box domes. Until last year this was done by hand shears, which was laborious and would take about a month to complete. Tanis, who has been in charge of gardening at Tintinhull for nearly 20 years, had previously tried petrol trimmers, but the vapour caused scarring of leaves and the noise was an annoyance to visitors. She had also tried electric trimmers, but says she didn’t get a clean cut because the reciprocal action of the cutters chewed the edges of the leaves badly and caused similar unsightly browning. Hence a return to hand cutting, but with a number of different individuals using hand shears uniformity was hard to achieve, and this is essential with the domes, which are a precious heritage.

The Pellenc battery-powered trimmers she now uses have made it so much easier to achieve a smooth cut line, according to Tanis.

“There is no scorch and the risk of error is far less,” she says. “Switching to this equipment has saved me three weeks work – easily.”

Tintinhull is effectively a ‘subsidiary’ of Montecute House, another of the Trust’s south Somerset properties. Tanis borrows the Pellenc trimmers from there on a weekly basis and has them from Monday to Wednesday. At present she doesn’t have a solar panel facility, but plug-in powering of the battery overnight is sufficient for a day’s trimming.

“The back pack makes using them during visiting hours so much easier”, she adds. “You can easily step aside if need be, and visitors far from being inconvenienced by what you are doing, show a lot of interest in such quiet trimming.”

Tanis has also used the new trimmers on a bay arch in the gardens, also previously cut by hand shears. Bay is very tough to cut and you get a lot of chewed edges. The Pellenc trimmer made lighter work of it and with better results, she reports.  Another job, tedious with hand shears, the trimming of lower box edging around beds in the kitchen garden, has now been completed for the first time using the back-pack trimmers with very pleasing results.

So keen on the Pellenc trimmers is Tanis that she hopes to have her own for the 2012 cutting season at Tintinhull.