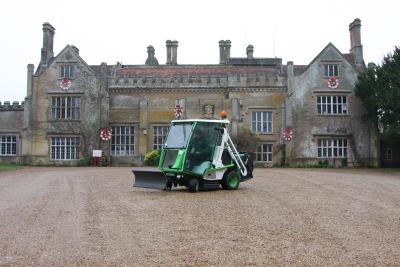 One of the South of England’s major year-round attractions, Marwell Wildlife in Hampshire, is poised ready to deal with a repeat of last year’s record breaking winter. The 140-acre site, which is home to more than 180 different species and acclaimed for its conservation work, welcomes nearly half a million visitors each year. It managed to stay operational throughout weeks of snow and ice 12 months ago thanks very largely to the acquisition of a snow blade attachment to one of its mowers.

Lance Ingram, Head of Grounds and Plants for the charity, says M & S Turf Maintenance Machinery of Southampton supplied them with a snow blade to fit its Etesia 124D ride-on mower at very short notice when the weather took a hold last year.

“It did a really good job – absolutely brilliant,” said Lance, whose department looks after Marwell’s Landscape and Grounds maintenance.

“We were able to keep much of our pedestrian areas and car parks pretty clear. Visitors were able to get around the park safely, even when the snow was at its worst. Visitor income is vital to Marwell’s conservation work both here in the UK and abroad, so we wanted to be absolutely ready for any sudden cold snap by fitting our Etesia snow blade ahead of the busy school holiday period. We do now have another larger vehicle -mounted snow plough, but the Etesia is one that is so useful in clearing the tighter areas close to visitor facilities.

Marwell has two Etesia 124D mowers and they are on duty around the calendar – snow or no snow – fine cutting lawns and amenity grass areas. One of the mowers is also appropriately fitted with an all-weather cab. Lance says that grass cutting at Marwell is carried out either before opening at 10.00am. His team of seven ground persons work in close collaboration with the keepers to ensure the maximum welfare of the 1200 plus animals.

Lance, who has been at Marwell for five years, says he is looking to add at some point in the future of other Etesia attachments and was particularly impressed by the scarifying heads he saw demonstrated at SALTEX in September last year.

Quietly getting on with things
Scroll to top