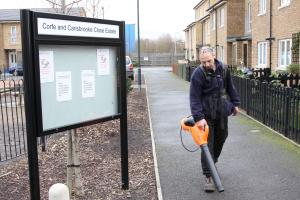 Charles Rodriguez established Garden Thyme Limited, a grounds maintenance business, to service the Hampshire, Surrey, Berkshire, Middlesex and South West London areas twenty years ago. Initially contracts were confined simply to grass cutting and maintenance on the many housing estates that were springing up in the South of England.

Council housing’s grassy surrounds provide a major source of business and as a result Garden Thyme’s involvement in keeping estates green amenities ship-shape has continued to grow. Grounds maintenance remains the core of the business, but in general the associated disciplines include; arboriculture, park patrol, sports field management and planting and designing new borders.

Charles says that there has always been a pride in minimising the intrusive side of the work that they do: “Most of the sites where we work are sensitive in one way or another. As we work in predominantly residential areas, the sound of petrol machines is not necessarily welcome”.

For weeks on end Charles and his team have the daily task of seeing that not only are the residential areas as leaf and litter-free as possible, but that the surrounds of the play areas are safe from fallen leaf hazards and always look in tip-top order.

Charles’ dilemma had always been keeping a balance between controlling debris accumulation and minimising disruptive noise, so much of the work was previously done by hand. When a petrol blower could be used, the operatives needed air defenders, and so residents did not welcome leaf blowing.

Around three years ago he first saw Pellenc lithium-battery equipment at IOG SALTEX and bought his first piece of equipment – two Helion hedgecutters along with battery pack from his machinery dealer, Richmonds Groundcare of Esher. After the launch of the Airion blower last year, Charles thought this could be the answer his problems.

Weighing only 2.6 kg and with a noise level of just 80 db, it is the lightest and quietest professional blower on the market and can be used near sensitive areas such as hospitals and schools. It is very comfortable to hold owing to the soft touch new generation handgrip and is optimally balanced for natural tilting towards the ground.

The Airion has 4 speeds which easily enable the operator to effortlessly optimise and adjust the speed of the air expelled according to its working environment and the site to be cleaned. Keeping the speed selector button pressed instantly selects the booster mode, giving a maximum power of 750 Watts. This function is especially useful for picking up wet vegetation or heavy waste matter.

“At first, one of the residents at one of our sites thought that the blower was actually broken because it was so quiet!  We can now start work on site earlier which also enables us to get on with other tasks.

“All of the operatives like using the equipment because they are light, quiet and are very low vibration compared to the petrol equivalents. Because the machines are battery powered, we know that they will ‘start’ first time, every time with no risk of the plugs fouling or the pull-start breaking.

“The other advantage is that we no longer have to mix 2-stroke fuel and carry petrol cans with us. The reduction in fuel expenditure is a big factor for us. In a single year we must have saved hundreds of pounds”.

Let it snow. Marwell is ready for it.