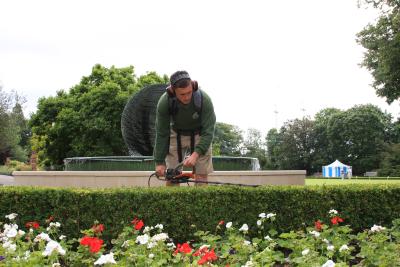 The 42-acre Hurlingham Club beside the Thames at Fulham in west London, probably the most prestigious private sporting club in the country, is introducing Pellenc battery-powered equipment into its grounds maintenance repertoire.

Grounds Manager Peter Craig is doing this to lower noise levels and make the jobs of hedge trimming and leaf blowing more comfortable for his staff.

Last year Peter bought two Pellenc Airion leaf blowers and a Helion hedge trimmer from equipment supplier Surrey Power, and earlier this year added a further one of each.

The Hurlingham Club has 13,500 members and a 15-year waiting list. Outdoor facilities there include 30 grass tennis courts, 10 croquet lawns, a cricket ground, two bowling greens, a small golf course, and a 2-acre lake, which feeds an irrigation system. The presentation of the grounds is what makes the club so special, but being in a residential area does pose problems for Peter.

“We have over 100 trees in the grounds and leaf fall is a consequential hazard of such a lovely environment,” said Peter, who has over 30 years experience in groundsmanship.

“Keeping the grass playing surfaces and all the paths and roadways clear is a daily task, even in summer with such fluctuating weather and anthracnose causing debris from our many plain trees.  Our biggest problem has been the noise that leaf clearing makes and it’s been difficult keeping both local residents and our members happy. 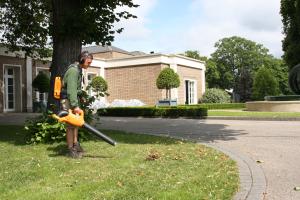 “Most of our grass courts are on the perimeter of the grounds which means we have to clear them before members arrive for play. In the past, we haven’t been able to use any machine before 8.00am to avoid disturbing the neighbourhood, but even after that some local residents have complained about the noise from our petrol blowers.

“The new Pellenc blowers mean we can start as early as 7.00am and nobody can hear them. It’s made a massive difference. No annoyance to locals, members having clear courts for early play and everywhere looks tidy ahead of our earliest arrivals.”

The Hurlingham grounds have a wide variety of ornamental and practical hedging – lonicera, cotoneasta, fagus (beech), lagustrum, laurel, box, yew, chameacyparis – each with different trimming needs. The problem for Peter and his staff here has not been the noise of the job, but the discomfort of using a petrol-powered machine for long periods of time.

“Hedge trimming doesn’t cause noise difficulties with our neighbours because the job can be done at any time. The benefit here of switching to battery-powered trimmers is the ease of use. They are so much lighter, yet just as effective as petrol machines, and of course quieter, free of fumes, and without potential harmful vibration.”

Peter sees battery power as the way forward for essential routine work like this. He is finding that one of his new Pellenc Helion hedge trimmers can be in use all day on a single charge and he gets up to three hours work out of one of the Airion blowers. His plan over time is to replace all of his petrol machines, as they come to the end of their operational life, with Pellenc battery units.