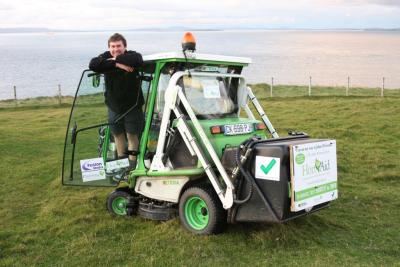 One man has completed a 1,250 mile journey on an Etesia H124 ride-on mower in aid of national horticulture charity Perennial. Phil Voice trundled into John O’Groats on 15 October on the mower, successfully completing the epic ‘Mowerthon’, raising funds and awareness for Perennial.

Phil Voice of the Landscape Juice Network set off from Bergerac in France on the Etesia ride-on mower on 1 October. With an average speed of just 7.5 mph, the journey was hard going, but he successfully reached John O’Groats exactly two weeks later. Donations are still coming in and the Mowerthon is expected to raise more than its £10,000 target – anyone who still wishes to donate can do so at: www.justgiving.com/mowerthon

Phil used an Etesia H124 Professional ride-on mower and was supported by Etesia, their dealers and staff in France and the UK along the whole of his journey. The mower was the same as a commercially available machine used by local authorities and landscape professionals, but fitted with a cab to cope with the unpredictable weather. Etesia now plans to auction off the mower (further details to be announced shortly), with some of the profits donated to Perennial.

Phil describes his experience: “For me the Mowerthon was an adventure of a lifetime but I never lost sight of the important reasons why I was doing it. Driving so slowly, over such a long distance gave me a lot of time to think about why it was so important to raise money for Perennial and also raise awareness of the challenges landscape and horticulture practitioners face. This spurred me on day after day, sticking to a gruelling schedule so that I could complete the journey. I feel so emotional when I think of everyone who helped make the Mowerthon happen and who gave something, be that their time or money in making the Mowerthon a success. My very special thanks go to Etesia for their commitment and dedication to the project.” 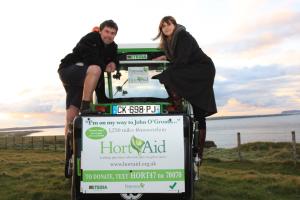 Perennial provides free, confidential advice, emotional support and financial assistance to people of all ages working in or retired from horticulture and their spouses, partners and children. The charity helps professionals such as gardeners, landscapers, tree surgeons, greenkeepers, plantsmen and groundsmen. Its work depends entirely on voluntary donations from the horticulture industry and the garden-loving public, and the funds raised from the Mowerthon will be invaluable to the charity’s ongoing work in helping individuals and families.

The Mowerthon was only made possible through the tremendous support of a wide range of UK landscape companies. Supporters included Forecourt Fuels Ltd, one of the UK’s largest fixed price fuel card providers, which supplied Phil with a fuel card at cost price for his UK leg, Affinity Landscapes which pledged to cover 50% of the fuel bill, keeping costs to Perennial at a minimum and Fusion Media (Europe).