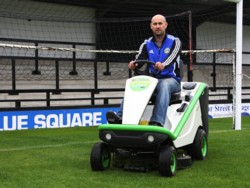 Green is the driving force at ambitious Blue Square club

The boss of Ecotricity, the green electricity company which this summer hit the headlines with the launch of a countrywide network of solar power re-charging points for electric cars, is extending his mission statement and business ethos to the world of football. He is one of the first if not the first businessman to own and run an electric car, so where to next? As the kick-off to the 2011-2012 season approached pitch mowing became part of all this with a new mower from Etesia being launched at this year’s IOG Saltex the focal point.

Dale Vince OBE took over as Chairman of Forest Green Rovers just nine months ago and is step by step transforming the Blue Square Premiership club into an entirely green and eco self-sufficient enterprise. The aim is to make it the first such club in British professional football. Water recycling from all sources – rainwater and the washing-up – is already very much a feature at the delightful Gloucestershire stadium, charmingly called the New Lawn. There is a five-year sustainability plan and the first building blocks are firmly in place. He’s called what’s starting to happen to car powering a revolution. There may well be a similar kick-start in the world of football.

The Club had moved just a few hundred yards from its previous abode on the edge of the country town of Nailsworth back in 2006. Not surprisingly this

was called the Lawn. Rovers’ new home is a handsome stadium, certainly for this level of the football pyramid, but as groundsman Stewart Ward points out, the initial pitch did require subsequent improvement, notably a fresh drainage system installed by contractors Pugh-Lewis and which links into a water recycling set-up.

Stewart’s appointment last year was another move in the green direction for the Rovers, since he shares the Chairman’s thinking wholeheartedly. He explains that the philosophy at the club is a simple one – to be more sustainable, greener in its day to day running, and have a more organic approach to how they do things. It is Stewart’s first venture into football groundsmanship. He and Forest Green Rovers seem tailor-made for each other.

“The chairman is passionate about all of this and is very much a father-figure for putting it into action,” he says.

“Obviously this very much affects the way I keep the pitch in shape. What Dale has in mind for the club is very much how I have always felt and I am really enjoying putting it into practice bit by bit. There’s a lot more to do of course.”

Stewart had been a user of Etesia machines in his previous job looking after the grounds at Gloucester’s Hartbury College, best known for its equine, sports and landscape science courses, and had long been a fan of the French manufacturer’s attention to environmental aspects of product development. It has been working on battery and solar-powered ride-on mowers for sometime as a practical eco alternative to traditional fossil fuelled machines for sports and amenity surface cutting.

As part of the fine-tuning process prior to IOG Saltex launch Stewart used one of the company’s new Bahia Electric ride-ons on trial for pre-season cutting. The idea was to provide Etesia’s UK general manager Les Malin with real feedback on its performance. It was the breaking of new ground. Forest Green Rovers was the first football club in this country to use electric mowing for its pitch, and Stewart gave it a good report – not just because of his own eco leanings – but for its cutting and collecting credentials.

“It does the job really well and at a decent speed,” he said. “It’s so much quieter than a petrol machine with much less vibration too, and of course there is absolutely no worry about oil or fuel spillage.”

The New Lawn pitch was renewed at the end of May. Koro removal of the previous surface was followed by the addition of 150 tons of sand and re-seeding with Rigby Taylor’s R14 mix, incidentally the same as used at Stamford Bridge.

The Bahia machine on trial at the New Lawn was plug-in re-chargeable, but it could be that the club will eventually opt for solar powering the four 48v batteries. Full charging takes six hours via a 16amp 200v socket and charger. This, says Stewart, is about twice what you need for cutting and collecting a full size pitch, and the New Lawn is a big one, 100 x 70 yards.

The Bahia’s cutting width is 80cm and with the newly established summer sward Stewart showed off an impressive mown look, invitingly ready for the club’s first home pre-season friendly against Bristol City. He was confident that the New Lawn would be looking immaculate two weeks later for the first home league fixture against Stockport County when Sky Television cameras would be putting the mower’s finish to public gaze.

Stewart sees that all pitch cuttings are recycled, passing them to a local farmer. All clippings are 100 per cent non-toxic at the New Lawn because all pitch treatments are organic-based and he is regularly in touch with the Soil Association for advice on nutrient application. He says the grass box on Etesia’s new electric mower (240 litres) does an efficient collecting job for him. Both driving and cutting transmission are 100% electric, so there’s absolutely no addition to the eco footprint.

For a football club chairman and its groundsman to share an interest is rare enough. For them both to embrace the virtues of a piece of turf kit is a big first in football. All the nasties that combustive equipment put into the atmosphere – hydrocarbons, carbon dioxide, the lot – score nil at the New Lawn thanks to the Etesia Bahia and this gets a big cheer from the directors box and the groundsman’s hut. Supporters may for the moment be more interested in how the team is doing, but the green mood is definitely catching down at FGR.

Groundsmen wanting to see Etesia’s new Bahia ride-on electric mower and the optional solar power re-charging source for themselves can do so by visiting stand UO5 and demo plot UO4 at IOG Saltex.

Another New Dealer Appointment for Etesia