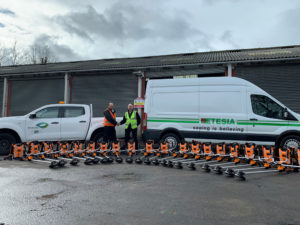 The new range of Pellenc equipment has been purchased by the company’s department in the London Borough of Bromley and Angus Lindsay, group head of assets and fleet management, says that the purchase reflects the company’s stance on becoming more environmentally friendly.

“We have purchased more electric equipment this year than we have done in all the previous years,” he said. “It is a mixture of being driven by contracts, clients and because ultimately it is the right thing to do. As a company, we have approximately 10,000 pieces of machinery out there and around half of them are all two-stroke or small four-stroke. That is a lot of emissions and we therefore need to start doing something about it.”

Since 2015 idverde has been responsible for the management of the parks, green space and countryside in the London Borough of Bromley and Angus, who has sole responsibility for the vehicles and machinery operated by idverde – from specifying, purchasing and whole life management through to disposal, explained his thinking behind choosing the Pellenc Excelion 2000 brushcutters fitted with City Cut heads.

“In the London Borough of Bromley we suffer a lot with thrown debris from traditional line cutters. It could be grass splatter on head stones or it could be stones flicked towards cars and houses – it is a big issue. So, when you weigh up the cost of damaged paintwork, broken windows and the emotional cost of having a loved one’s headstone splattered with grass, it made sense to look at an alternative.”

Designed for routine maintenance or intensive strimming, the Excelion 2000 is robust, powerful and lightweight. It perfectly eliminates tall, dense grass, woody weeds, brambles and shrubs and can be fitted with a range of five interchangeable heads, depending on the task required.

The idverde team in Bromley will be using the City Cut head which is particularly suited to the maintenance of urban spaces. The City Cut’s counter-rotation technology, which is exclusive to Pellenc, avoids plant, gravel, stones and debris from projecting and causing damage to surrounding areas.

“The City Cut head on the Excelion 2000 provides us with a solution to thrown debris along with the benefits of electric power in terms of noise and pollution,” said Angus. “The other sites where we will be using them are next to schools. We are not allowed to operate in school hours because of disruption to the classes but electric equipment is a lot quieter so you can extend your working hours. This also applies to hospitals and care homes because you are a lot less disruptive with battery powered equipment.”

The idverde team purchased the Pellenc ULiB 1500 batteries, which have the highest capacity on the market, to power their Excelion 2000 brushcutters. The battery is supported by an ergonomic and lightweight Pellenc harness which offers an ideal level of comfort when in use. Its weight is perfectly distributed over the key back support areas, so 70% of the weight rests on the hips, with only 30% on the shoulders. The entire carrying system, from the straps to the thoracic spine area, can be adjusted for any shape and working styles and the battery is watertight to IP54 for use in the rain.

“Battery powered products, in general, are getting so much better,” said Angus. “They have moved away from getting just 10 minutes out of them before having to go and charge them to getting a full day’s work. They are now professionally built and are certainly up to the task.

“Pellenc make a very good product and as a company we’ve taken more battery powered equipment on-board to address environmental issues. This equipment increases the working time and is better for the operators – they don’t have to wear the same amount of PPE (personal protective equipment) in terms of face protection and ear protection because it doesn’t have the same emissions and they don’t make the same noise as their petrol counterparts.

“Electric has to be the way forward,” he continued. “It is the environment, it is the workers – it is everybody that will benefit from it, so I think it is the correct thing to do morally as far as our industry goes. The government is pushing us to use electric cars and utilise the electric transportation system but they seem to forget that there are strimmers, hedge cutters, ride-on mowers and chippers that are omitting fumes everyday so therefore we must do every little bit we can do to help.”