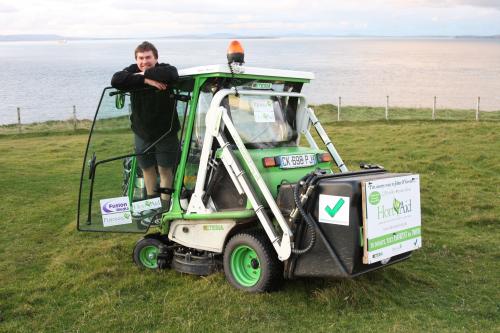 Following the successful ‘Mowerthon’ challenge last month, the Etesia H124 ride-on mower that completed the 1250 miles will be sold to the highest bidder via online auction house EBay, with the profits being donated to Perennial, the national horticultural charity.

Phil Voice of the Landscape Juice Network set off from Bergerac in France on the Etesia ride-on mower on 1 October. With an average speed of just 7.5 mph he successfully reached John O’Groats exactly two weeks later.

The Hydro 124D from Etesia is the first mower that combines direct rear-ejection, integrated collection and high-lift emptying, up to a maximum of 1.8 metres without leaving the driver’s seat, all features that make it one of the most highly efficient machines on the market. The machine in question also comes fitted with an all-weather cab complete with heating system, windscreen wipers and lighting system, making the H124 an all-year-round workhorse worth in excess of £36,000.

The auction starts on 7th January 2013 from 09:00, with bids starting at £19,000.  Further details can be found by visiting www.etesia.co.uk or by searching for Etesia ‘Mowerthon’ 124DN ride-on mower on the auction website in January.

Donations for the Mowerthon are still coming in, with the final total expected to raise more than its £10,000 target. Anyone who still wishes to donate can do so at: www.justgiving.com/mowerthon

Barton Grange Landscapes relies on Etesia for quality of cut