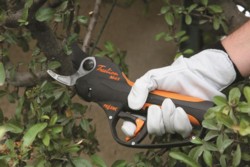 French manufacturer Pellenc has announced, with immediate effect, that all Lixion and Treelion pruning shears will now come with a three year battery and motor guarantee as standard, further powering the products ahead of the competition who remain to give a maximum two year guaranty as standard.

The Lixion are ergonomic pruning shears that combine power and speed whilst being the most compact and the lightest currently available on the market.

The primary characteristic of larger Treelion pruning shears is the ability to operate in continuous controlled mode, for precision work, or in pulsed mode for quicker cutting which has been described by many professionals as being years ahead of traditional electric pruning shears.

Both models are the result of six years of research and development work conducted by a full-time, ten-person team at the Pellenc R&D centre in Pertuis, France. Both are light, robust and fantastically efficient having been designed for intensive cutting work, whether it be for vineyard work, arboriculture, the upkeep of parks and gardens or forests. Unlike traditional electric pruning shears, which can run for up to half-a-day or a full day, the shears also offers extended running time of up to three days (Lixion).

Pellenc is the world’s first manufacturer to offer a whole range of professional tools which operate with the use of a high capacity lithium-ion battery, totally removing CO2 emissions and noise pollution.

The full range of Pellenc products are exclusively distributed in the UK by Etesia UK. For further information, please contact Etesia UK on 01295 680120 or visit www.etesia.co.uk

French manufacturer Pellenc has announced, with immediate effect, that all Lixion and Treelion pruning shears will now come with a three year battery and motor guarantee as standard