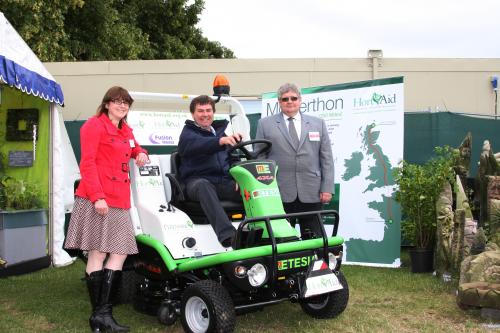 Phil Voice, founder of the Landscape Juice Network, has announced that he will be driving an Etesia H124 mower from Bergerac in France up to John O’Groats in Scotland, to raise money for Perennial (Royal Gardeners’ Benevolent Society). Not only is he travelling through two different countries but, Phil will be racking up the mileage covering an enormous distance of over 1,250 miles (2000km).

Phil’s Etesia ‘Mowerthon’ machine is being prepared at the Etesia factory in France to include a cab with heater for the unpredictable British weather. Phil will be stopping to mow at special locations which will be revealed shortly before he starts on this epic journey at the beginning of October.

Phil has taken on this ‘Mowerthon’ to raise money for Perennial – the national trade charity which provides free, confidential advice and support to everyone working in, or retired from working in, horticulture, and their families, including gardeners, landscapers, nursery and garden centre staff, parks and grounds care staff and tree surgeons.

“I’m always thinking of ways to help, and sitting at my desk one day I thought about walking from Lands’ End to John O’Groats to raise money for charity, but this had already been done,” commented Phil. “I then had a brainwave. Why not do it on a mower? Better still, why not do it from my home in France? After an email to Les Malin at Etesia which he forwarded to Patrick Vives, Etesia’s President, they offered a machine with their full support. 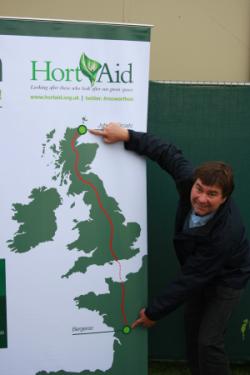 The next challenge was to work with an appropriate charity. Lindsey Churchill of Perennial was extremely active on the network and I felt Perennial were more closely aligned, helping the horticulture practitioner, with what LJN does than anyone else out there…so I contacted Lindsey and here we are now.  We’re also looking for a similar charity to work with in France”.

Etesia are delighted to sponsor this fundraising activity by providing the machine, as well as providing a support crew and their strong dealer network are looking forward to supporting Phil along his journey.

“We were introduced to the Landscape Juice Network three or four years ago and have found it to be an extremely good way of speaking directly to our end users”, said Les Malin, Etesia UK General Manager. “When Phil approached us with an idea that he wanted to ride a mower from France to John O’Groats, our initial thought was that he was mad.

When he explained to us why he was planning this event, to support and help the industry he’s worked in all his life, then we were only too happy to support Phil with his journey. We look forward to meeting him at John O’Groats”.

There are plenty of ways to sponsor or get involved, simply visit www.hortaid.org.uk or if you would like to donate, please visit www.justgiving.com/mowerthon.

Etesia UK is excited to announce the appointment of Webster Power Products, based in North Lanarkshire, Scotland as an official sales and service dealer for the Etesia ride-on mower category and Pellenc range of battery-powered equipment. The company takes on responsibility for central Scotland and the borders.

Etesia Northern and Southern Sales Managers have been working hard over the last few months in recruiting new dealers for both Etesia and Pellenc products, and Andrew Roberts, the Northern area Sales Manager, has seen a significant rise in the number of new dealer appointments in his region.

Based in Wishaw, Central Scotland, Webster Power Products was started by current Managing Director Murray Webster’s mother and father in 1977. The company’s philosophy today is the same as it was in 1977, which is to provide customers with ‘The right tool for the job’. “We pride ourselves in not only understanding the jobs our customers do, but also being able to offer accurate advice, saving our customers time and money,” commented Murray.

The business today is still operated with a very hands-on approach. The company has a purpose built 60,000 sq ft premises and operate with a team of 22 employees.

“There is a wealth of experience and technical know-how within our sales and after-sales departments. This experience will be invaluable to past, present and future Etesia and Pellenc users as we strive to build the business among customers in the public and private sectors throughout our allocated areas.” 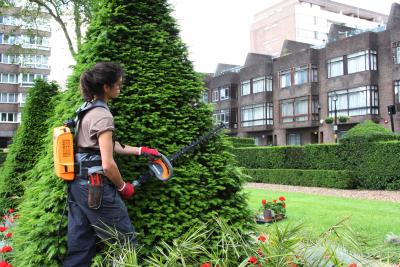 A section of residential central London is undergoing a major change in the way its communal gardens are maintained, with a marked benefit to the local environment. This significantly includes the machinery being used to do it.

The Church Commissioners Hyde Park Estate, an area bounded by the Edgeware and Bayswater Roads, is maintained under contract by Tony Heywood Landscapes, one of the few gardening businesses actually based in central London. Its proprietor Tony Heywood has set out to promote the whole idea of sustainable practices in gardening for the private squares under his charge and owners of the land, the Church Commissioners through its management agents Frank Knight, have agreed to a three year programme of step-by-step action to achieve it.

Tony Heywood Landscapes aim to be seen as a ‘green’ unit in London. Both they and the Church Commissioners are keen to promote an image of environmental responsibility.

The scheme being put into action by the company’s team of seven staff, all of them trained horticulturalists, involves different planting regimes such as prioritizing perennial bedding rather than annuals, and replacing chemical control of weeds with hand weeding and organic methods. 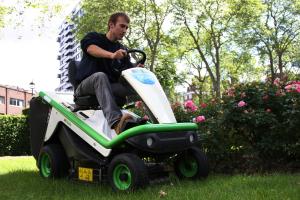 Another of its principal features is a gradual switch-over from petrol to battery-powered equipment for the routine maintenance tasks, and this is already under way with the recent introduction of a Helion hedge trimmer, an Airion leaf and debris blower, and an Excelion strimmer all made by French manufacturer Pellenc. These were all supplied by Aylesbury-based RT Machinery, which has also provided, on trial, a battery-powered Etesia Bahia ride-on mower. After just three months usage there is favourable response from both staff and residents for all of these. Reduced noise levels, hand vibration, and elimination of fumes have all been welcomed, according to THL head gardener Lucy Mackenzie.

“The Pellenc and Etesia machines impressed me most and they are already proving their worth. I already had a good working relationship with RTM and will continue to talk to them about how we can extend the switch-over and keep a check on future developments in this area by the two manufacturers.”

Tony Heywood, who also lectures on garden design, is closely associated with the Royal Horticultural Society, he and his partner Alison Condie being its ‘artists in residence’.  He hopes the example being set in this part of London for the way its squares and gardens are looked after can set a standard for such work in urban areas everywhere. 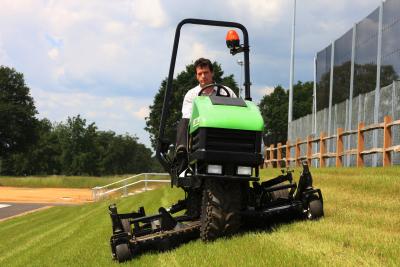 Etesia UK say that they have recently seen an extremely high demand for demonstrations of both their Attila A180 all-terrain ride-on mower and also their Attila SKF which is now available with an optional dual wheel kit for extra stability on uneven terrain and steep slopes of up to 25°.

Fitted with tyres of an agricultural profile, with a very low centre of gravity and optimised weight distribution, the Attila SKF fitted with the dual wheel kit which gives a wider wheel base, is primarily used for mowing banks and slopes around buildings, playing fields and also on rough areas situated around golf courses.

The differential lock with foot control is very practical in use and will allow you to retain control while mowing on slopes, even if a drive wheel loses grip. Fitted with a profiled mowing deck and reversible swing tip blades (85 cm cutting width), the system allows mowing in difficult conditions.

Hand or foot control for drive transmission, from 0 to 10 km/h: select the control you prefer and adapt your speed precisely to the terrain (slopes, obstacles etc.) or grass for closely controlled mowing.

The Attila A180 revolutionary ride-on brushcutter is perfect for safe mowing on banks and uneven terrain of up to 50%. Whatever the angle of the site, Etesia’s Attila A180’s unique automatic self-levelling system keeps the central driving unit upright, allowing the operator to work safely on slopes up to 27 degrees. A dashboard light warns when this limit is reached. The machine has a certified ROPS plus hydrostatic drive, power steering and good all-round visibility. 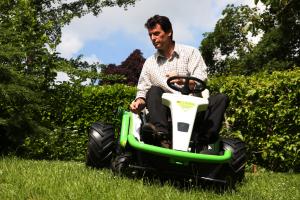 Powered by a 30hp Yanmar water-cooled 3 cylinder diesel engine, the Attila A180 has a hydrostatic drive, power steering and hydraulic drive to the cutting units. It is specially designed for large sites such as motorway banks, industrial estates, reservoir banks and other uneven terrain.

“While slopes and hillsides add dimension to the landscape, those same slopes can be extremely dangerous to mow without the correct type of mowing equipment”, says Les Malin, Etesia UK’s General Manager. “The big mistake is to use a standard ride-on mower for maintaining steep slopes as they can easily become unstable on gradients, putting the operator at risk”.

Etesia UK offers free demonstrations of both the Attila A180 and Attila SKF, fitted with the new dual wheel kit for extra stability on bank and slopes.